Friendship characterizes the complex set of relations produced between a series of quasi-utilitarian objects and their context, the multiple possibilities they suggest and the people that activate or produce them. Each work depends and relies on something else, which might be participative, or physical, infra- structural – such as electricity, water, the wall, the floor, people, etc. Referencing the design of nineteenth-century museums, which were modelled on private domestic galleries, Intentional Objects… inhabit space as furniture-like things, and as discreet alterations to the physical fabric of the buildings themselves.

“You have won rooms of your own in the house hitherto exclu- sively owned by men. You are able, though not without great labour and effort, to pay the rent. You are earning your five hundred pounds a year. But this freedom is only a beginning –the room is your own, but it is still bare. It has to be furnished; it has to be decorated; it has to be shared. How are you going to furnish it, how are you going to decorate it? With whom are you going to share it, and upon what terms?”
– From Virginia Woolf, Professions for Women, speech delivered before a branch of the National Society for Women’s Service on 21 January 1931.

Alterations To Existing Conditions (to Simon Popper) consists of four interventions in the existing architecture of the space: an extraction fan has been installed, curtains removed and replaced by two screens articulating entrance and exit, and a window has been revealed. In this way the exhibition can be navigated by following the flow of light and air that comes from the street, is channelled into the exhibition, all the way through to the other space, past a window that allows you to know where you are. A wedge given by a friend becomes material for entering a new space and as a way to begin the making of an exhibition, by acknowledging and adapting the existing context.

A curtain separates space and articulates the relationships between inside and outside, day and night, public and private. The Bottom Line (to Kathrin Boehm) appears to designate a domestic space, and moves softly like an other-worldly jellyfish; yet it reveals another interior and an open window through its semi-transparent, heat-reflective weave.

The Weird Charismatic Power That Capitalism Has For Teenagers (to Johan Hartle) is a narrative device, made for multiplying talking together, and it is dedicated to the continuing conversations with the philosopher. The double ‘te?te-a?-te?te’ – referencing a type of seating invented for social relationships – furnishes the exhibition space as a place that has the ability to engage body as well as mind, in spite of the historical bias to view the spectatorial body as a disembodied eye. Hidden in plain sight, day and night, the museum bench acknowledges, recognises and admits the material ground of aesthetic vision, and its location in bodies with needs and limitations. It welcomes rest and climbing; it glows in the dark.

Taking as its starting point the ottomans of eighteenth-century public spaces, such as museums or parks, A Bras Le Corps – with Philodendron (to Amalia Pica) [in English ‘head on’] holds a two-fold existence as a form of transformative interspecies communication. A hexagonal sculpture has been turned into a sympathetic environment for houseplants flourishing in artificial conditions, which will in turn eventually completely overgrow it. The steel structure provides something to climb over for the plant with heart- shaped leaves, the ‘friend of the trees’ (from ‘Philo’, the friend, and ‘Dendron’, tree).

Neoplastic (to David Bussel) charts the search for a mysterious furniture-like object that appears in the only surviving photograph of Wladyslaw Strzeminski’s Neoplastic Room in Museum Sztuki, Lodz, Poland, from 1948. In what was the first artist-founded museum, invented as an institution for the art of the future, Strzeminski created a complete environment as an artwork to display other artworks, an exhibition room for sculptures by his lost love Katarzyna Kobro. The pursuit of the elusive object, which turned out to be called Spatial Composition, has led to its re-appearance in several guises throughout this exhibition: it is seen here from below, in a cumulative investigation through colour. It is also present in the baubau (to James Langdon) wallpaper, and is, or could be, under Spatial Composition 11 (to John Tilbury) – blanketed in the same way that furniture is covered when owners leave a house.

“One night as he sat at his table head on hands he saw himself rise and go. One night or day. For when his own light went out he was not left in the dark. Light of a kind came from the one high window. Under it still the stool on which till he could or would no more he used to mount to see the sky. Its faint unchanging light unlike any light he could remember from the days and nights when day followed hard on night and night on day.”
– From Stirrings Still, by Samuel Beckett, 1986-89

One day in May 2014, pianist and AMM group member John Tilbury performed a piano accompaniment of Samuel Beckett’s final prose Stirrings Still while sitting on Spatial Composition 11 (to John Tilbury), dedicated to him. He said: “My accompaniment is really a soundtrack. I am a pianist so the piano is featured. I am comfortable with it – no, not comfortable, I am familiar with the instrument.”

Following Beckett’s text above like a set of instructions, a stepladder functions as a desk as well as a viewing platform in The Double And The Half (to Avery Gordon).The structure is an assemblage of different bits of furniture, that all act as extensions to the human body – ladders and legs, prosthetic devices – which in turn rest on one another, so that none of them can stand up by themselves. As a device to work, talk and position oneself, it is dedicated to the writing and thinking of Avery Gordon, whose conversations appear in the book resting on it.

In the three-dimensional landscape of bau bau (to James Langdon) different elements, techniques and influences of Celine Condorelli’s practice cohabit, are layered on, and enact possible stories. From the German Bau for ‘construction’, which has its origin in the Old High German Buan ‘to dwell’+ the Italian onomatopoeia Bau ‘woof ’. The wallpaper billboard acts as a score and a documentation of the relationships between a series of narrative objects, both existing and fictional, present and absent in the exhibition, that question the legal status of objects themselves. They are called ‘Deodands’; objects, which, according to an English common law, valid until 1846, were implicated in legal arguments. ‘Deodands’ terribly upset the dichotomy between what is intentional and unintentional as related to the animate or inanimate, and transform any notions we may have on the status of objects as being fixed or reliable. They also describe how we rely on a set of manners and provisions for dealing with beings, things and objects in recognisable ways. 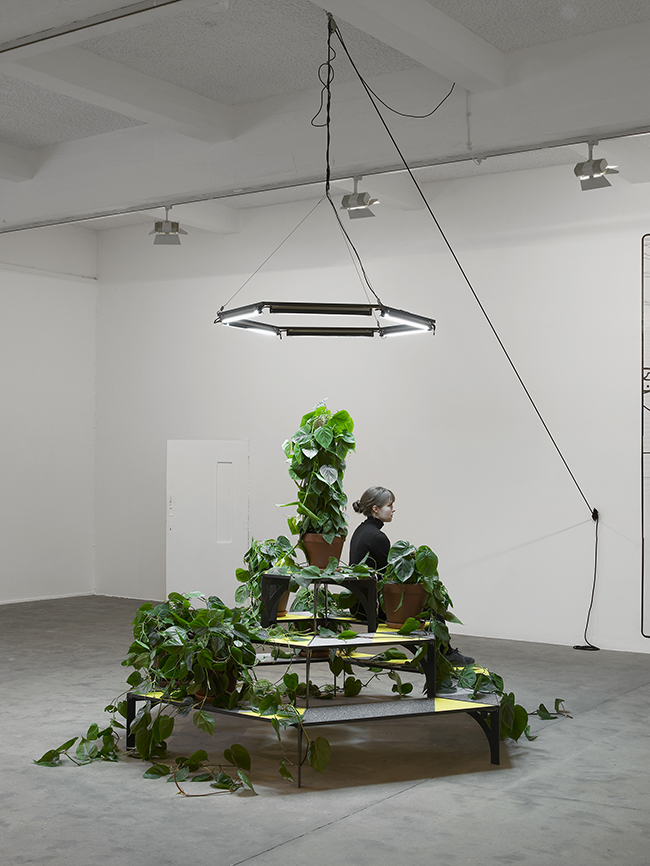 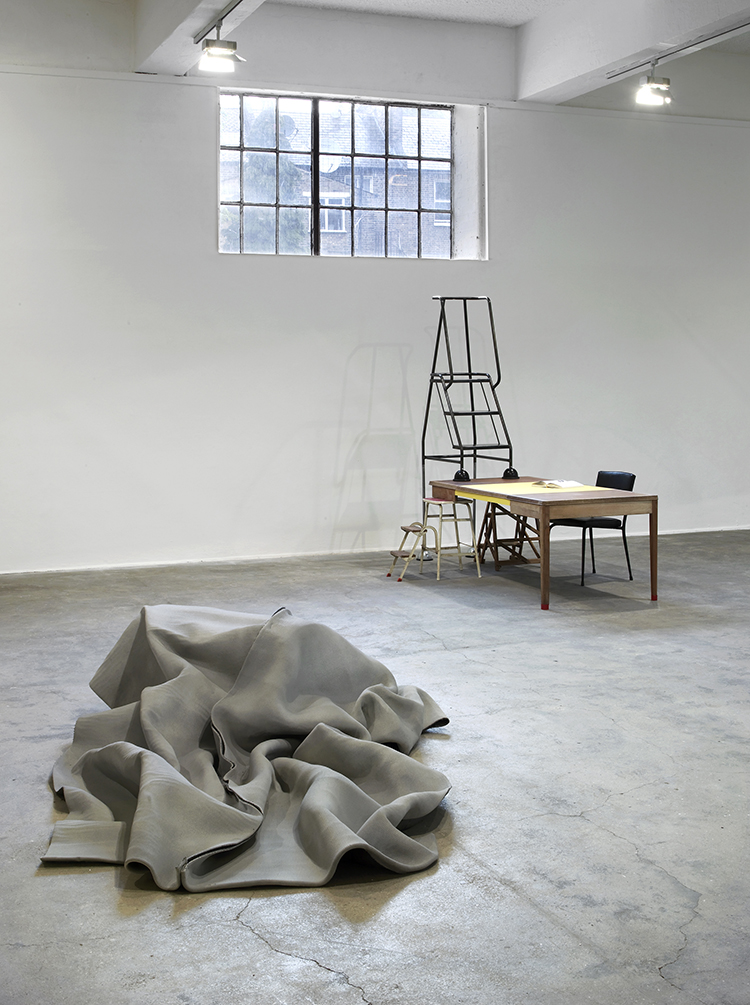 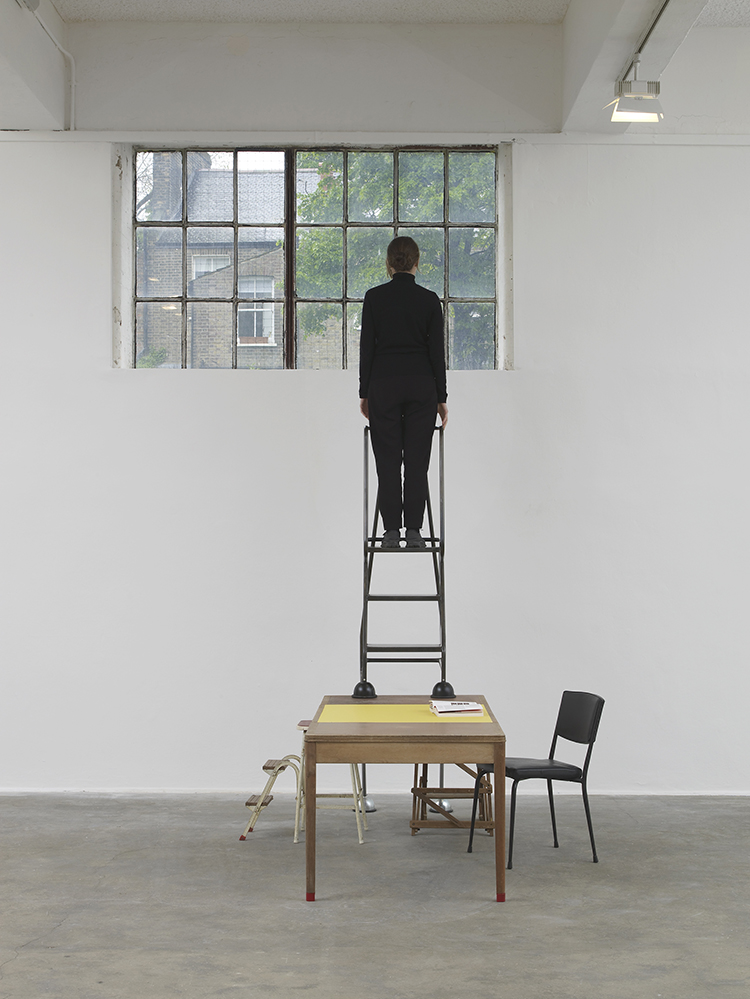 The Double And The Half (to Avery Gordon), Chisenhale gallery, photograph by Andy Keate. 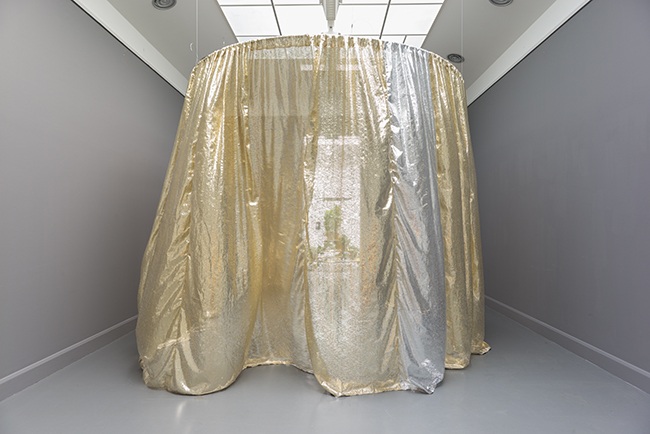 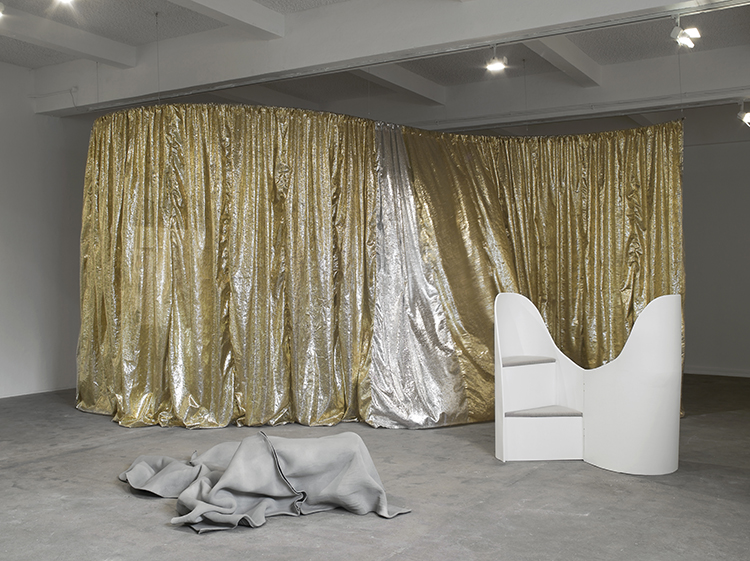 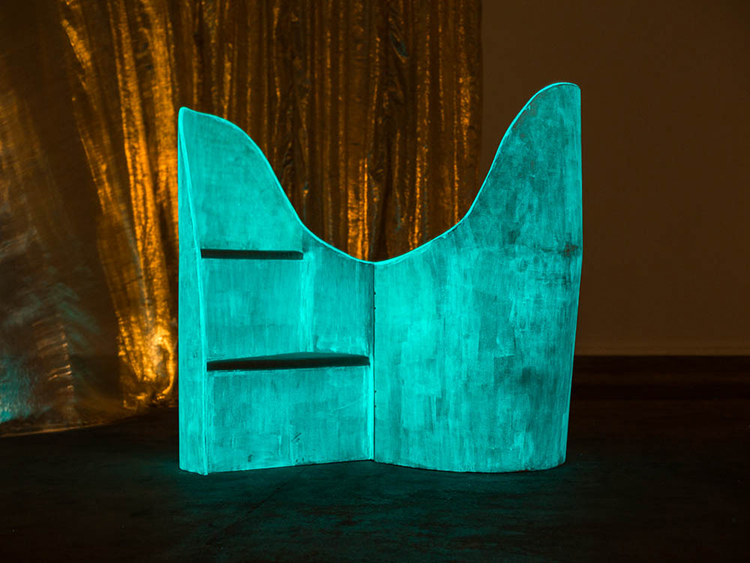 The Weird Charismatic Power That Capitalism Has For Teenagers (to Johan Hartle), night view, Chisenhale gallery, photograph by Mark Blower. 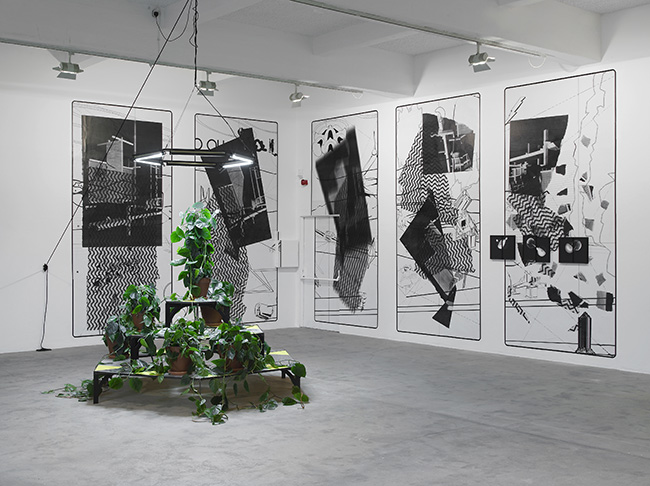 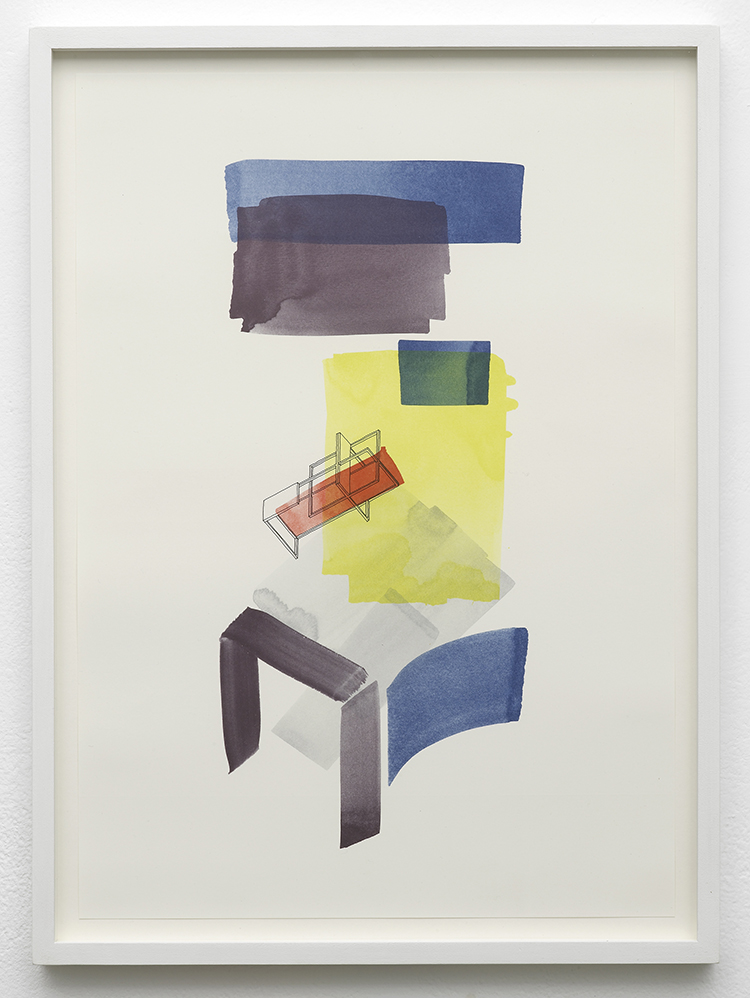 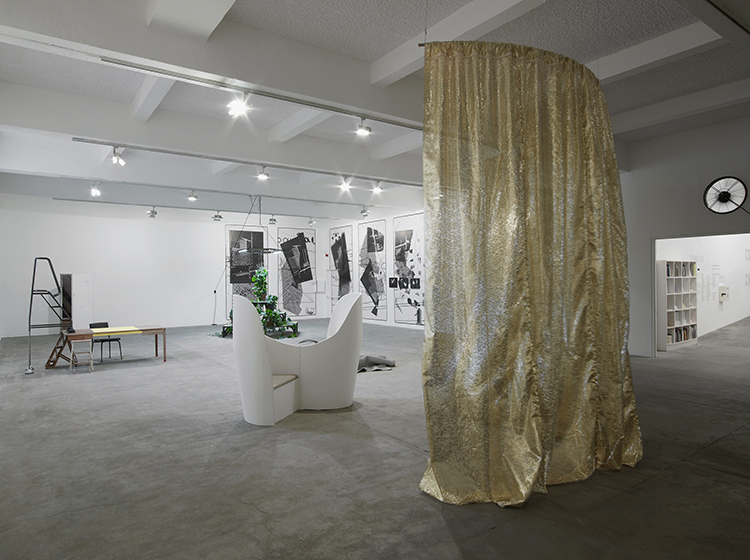 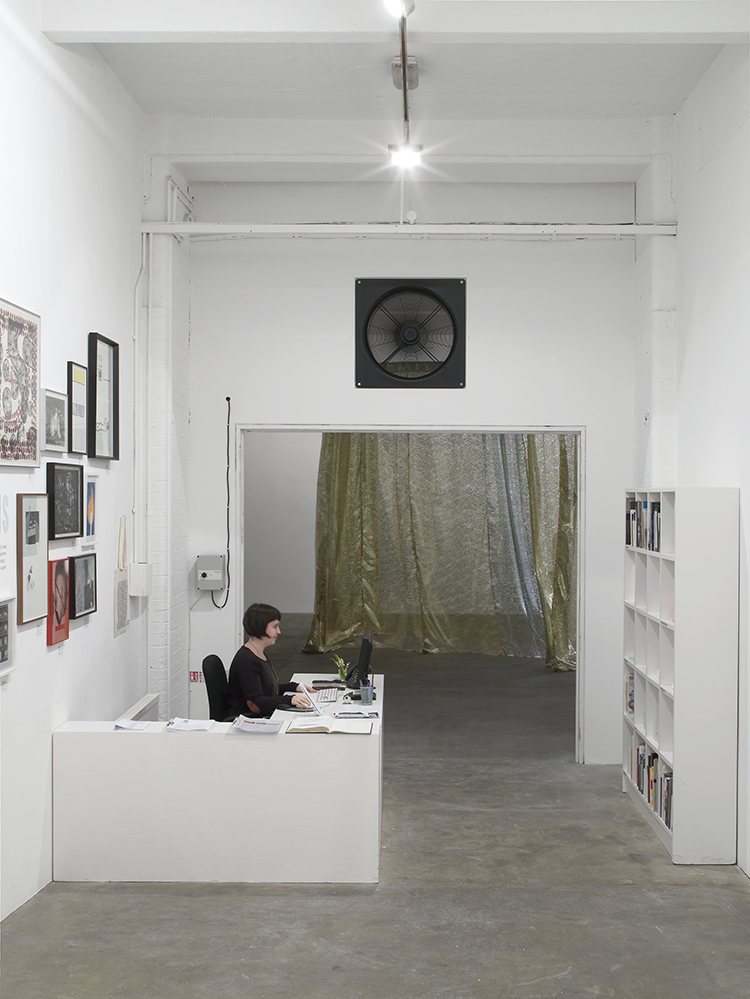